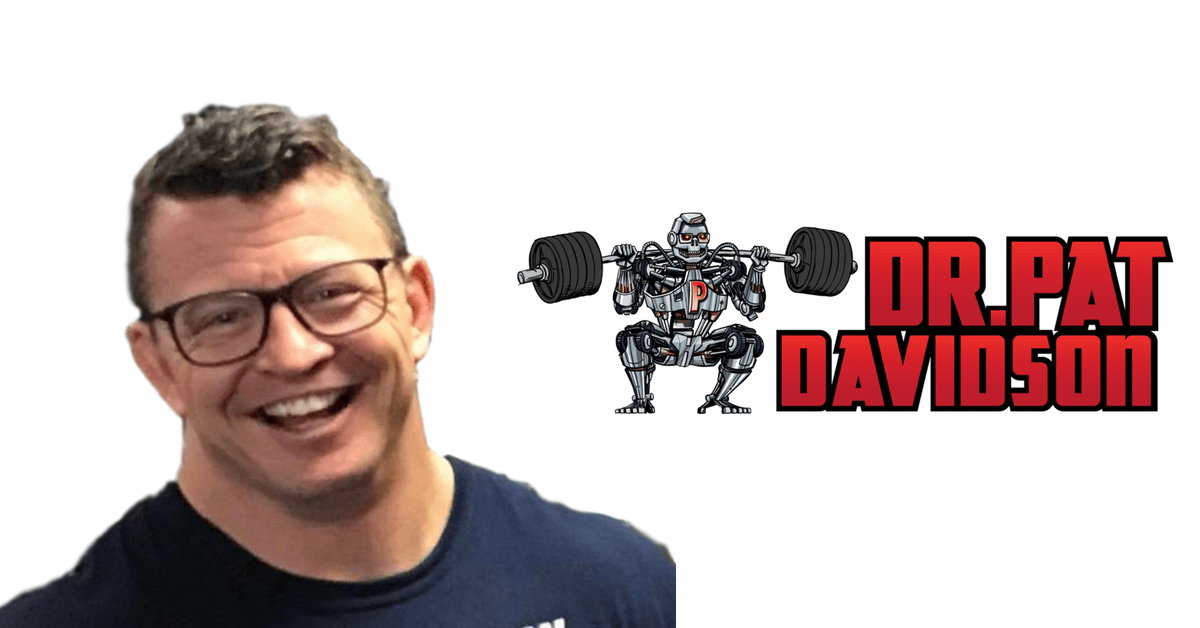 Pat Davidson, Ph.D, is an exercise physiologist, strength and conditioning coach, author, consultant, and traveling lecturer. Pat started out in the fitness world as an athlete who was looking to find any training and nutrition tool possible to make him the best he could possibly be at sports. This passion for training knowledge ultimately led Pat to pursuing a Master’s in Science in Strength and Conditioning, and a Ph.D in Exercise Physiology. Pat has worked as a Professor of Exercise Science at Springfield College and Brooklyn College, along with being the Director of Continuing Education and Training Methodology at Peak Performance in NYC.

Pat’s initiation into the fitness world came from watching the workout shows that would come on ESPN after Sports Center in the morning back in the 1990s. These shows featured group aerobics modalities along with body building training. Pat started working out when he was 14 years old. He saved his money, and requested any and all birthday and Christmas presents be directed towards buying fitness equipment that he put in his basement. He spent hours a day during the offseason between football and baseball lifting weights in that basement, and loving every minute of it. When not lifting, you could find Pat running in the snow with work boots on, towing his backpack filled with weights on the track, running hills, and throwing baseballs into trash cans from the outfield that were laid down on their sides at each of the bases. Hard work, planning, and always hammering away at the fundamentals have been part of Pat’s fitness DNA for as long as he has been in the game.

At age 20, Pat got exposed to the world of mixed martial arts. This is where things in the realm of training and nutrition really escalated. Mixed martial arts is a sport where fitness and body composition are tremendously important, and with the right training and diet plan, you can manipulate those variables to a high degree. During this time, Pat also was exposed to kettlebell training, power lifting using a Westside Barbell template, and also a mindset of learning how to sacrifice for a greater goal. The lessons of consistency, dedication, and delayed gratification learned in preparing for fights have carried over to every realm of life for Pat, and still are the most critical formative experiences he has had. Adult life is a multi-faceted, nebulous enigma, and most of us will fail to reach our potential in many realms due to conscious or subconscious fear. Learning to embrace fear, persist through fear, and coming out the other side alright are what fighting gave to Pat. If you can step into a ring and leave it all on the line, you can do anything.

After mixed martial arts, education came to dominate Pat’s life. Graduate school training in Exercise Science related realms became not just a career path, but an obsession for Pat. The deeper into studying he moved, the more beautiful the puzzle became. As the puzzle of the human organism became more vivid, the depth of the puzzle, and the ultimate realization that the puzzle is unsolvable presented its greater reality to Pat, and he came to find it even more alluring. Pat is an admirer of science, observation and description of perceived reality, and the universe. He is a believer in possessing a mind that is playfully curious and adventurous. He believes that opposition provides definition, and that two divergent, contradictory concepts can be simultaneously true. Above and beyond all things, Pat has a passion for learning, and the best way he has found to understand something is to try to teach others about that idea. If you want to know what Pat is trying to understand at any point in life, just listen, because he will probably be trying to explain that thing to you whether it’s at a conference, or over a cup of coffee.

After acquiring a Ph.D, and working as a Professor for a couple of institutions, Pat was introduced to the sport of Strongman while living in Springfield, Massachusetts. Having come from a hard training background in the fight game, possessing knowledge of Olympic style weightlifting, powerlifting, and athletic development training methodologies, competing in the sport of Strongman was a nice segue into reviving an athletic career. Pat was able to compete in two United States Strongman National Championship events, finish top ten in the 175 lb. weight class on both occasions, and qualify for the World Championships at the Arnold Classic, where he was able to finish top 10 in the world on one occasion. Competing in Strongman, and coaching other athletes in the sport provided Pat with a great opportunity to truly test out program design models in competitors seeking to reach the highest possible levels.

What’s next for Pat is never a question that has a singular answer. He keeps his eyes and ears open to see what others are excited about. When something catches his eye, he dives in on that topic. The last few topics that have really drawn Pat’s attention have been the biomechanics principles of the Postural Restoration Institute, the findings of the Human Genome Project, the inner workings of the different regions of the brain, and the history of the anatomical changes in the evolutionary lineage of homo sapien. These topics are all amazing rabbit holes that seem to have the possibility of sending you into a limitless number of directions on related topics, and all of them continue to stoke the fire of creative drive that Pat hopes will never burn out.